Story behind the story

NASA announced last year that it intends to send a robotic spacecraft, equipped with a suite of scientific instruments, to circle Europa in the 2020s.

Europa contains an ocean with twice as much water in it as the Earth’s oceans, but it is protected by a layer of ice of unknown thickness.
“Europa’s ocean is considered to be one of the most promising places that could potentially harbour life in the solar system,” said Geoff Yoder, acting associate administrator for NASA’s Science Mission Directorate in Washington.

“These plumes, if they do indeed exist, may provide another way to sample Europa’s subsurface.” 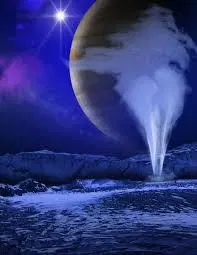 What readers are saying about the book

Unable to get beyond his grief, for twenty lonely years his love for her grows stronger.

Then, on a mission to Europa, aboard the ISS Galilei, Gilbert sees his dead wife within a mysterious energy source emanating from the deep ocean moon.

At that instant, Gilbert’s dead emotions are reborn.

Inspired by the vision, as well as uplifted to the heights of a higher consciousness, Gilbert begins the incredible mission to unravel and explain the Measurement Problem’s unknown potentials of superposition, and the infinite probabilities of life and death.

Is my wife alive or dead? Gilbert asks to the depths of his soul.

Unable to reconcile his emotions, Gilbert is willing to risk his own life to answer the question of the Measurement Problem.

Meanwhile, astonishing and dangerous events take place, immersing the Galilei’s Europa mission in a deadly crisis.  At the critical point, it’s determined that an energy source deep in Europa’s planetary sea is inflicting the Galilei with a killing ebb and flow stream of energy.

In a desperate effort, the Galilei tries to escape the killing energy but discovers that there isn’t enough power left to launch out of Jupiter’s mighty gravitational influence.

Amid the power ebbs and flows, at the brink between life and death, the evidence confronting the Galilei refutes scientific understanding of the conception of life, and the probability of immortality.

The Ululant Ache takes readers on a journey rife with action, suspense, and undeniable thrill.

A science fiction novel with heart